On January 15, 1919, after hours of rescue attempts by his fellow firefighters, George Leahey drowned … in a sea of molasses.  George Leahey was one of 21 people killed in Boston’s Great Molasses Flood of 1919. 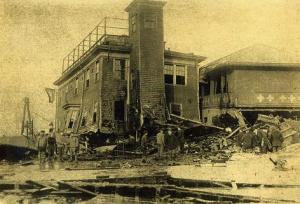 The exact cause of this bizarre disaster is not entirely clear, however, conventional wisdom seems to point to the weather.  The early part of January 1919 saw temperatures fluctuate drastically in Boston.  Temperatures rose to nearly 60 degrees in the first two days of the month before dropping back into the single digits a little over a week later.  On the fateful date of January 15, 1919, the temperatures once again soared to 40 degrees.

In 1919, U.S. Industrial Alcohol owned and maintained a 50 foot tank filled with molasses in Boston’s North End.  The warm weather preceded by drastic temperature fluctuations proved too much for the tank.  The bottom of the tank split open, and 2.3. million gallons of molasses exploded into the streets of Boston.  The sticky, brown substance rushed forth under a pressure of 2 tons per square foot creating a wave of destruction measuring over 5 feet high and traveling at 35 miles per hour.

The thick and powerful flood swept freight cars into buildings, causing the buildings to collapse under the force.  The wave hurled human beings into the air and then swallowed them in the thick pool when they landed on its surface.  Many people were also injured by the debris which filled the wave.  In the end, 21 people were killed, including several women and children, and 150 people were injured.  Twenty horses lost their lives and tremendous property damage was done to one of the busiest commercial areas of Boston. 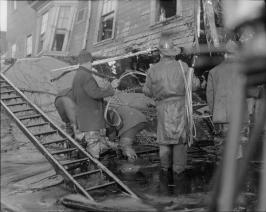 Firemen bogged down in molasses

The tackiness of the substance made cleanup extremely difficult.  For a time, everything in Boston seemed to be sticky as people’s shoes and wagons inadvertently spread molasses throughout the city.  The January temperatures caused the material to harden, and the debris within the mess created a sort of “disaster brittle.”  City water was ineffective in removing the mess, although salt water was found to be somewhat helpful.  It is estimated that over 80,000 man hours were required to get the area cleaned up.

Parts of the disaster area were considered a federally protected area because the tank had been a way station between ships that delivered the molasses from Boston to other the facilities of U.S. Industrial Alchohol which had used the molasses as part of its process to make WWI munitions. At the time of the explosion, however, the fighting in Europe had ceased and the company had begun to return to the practice of using molasses to make rum.  Prohibition would go into effect one year later. Cleanup on the North End

As mentioned above, the exact cause of the Great Molasses Flood has been debated for nearly a century.  At first it was asserted that the tank had been sabotaged by anarchist groups.  Eventually, experts determined that there was no criminal cause to the disaster.  The temperature fluctuations were certainly a contributing factor, but it was ultimately determined by the legal system that U.S. Industrial Alcohol was liable for the loss of life and property.  In what amounted to one of the first large class action suits in Massachusetts history it was determined that the tank had been poorly and hastily constructed.  Evidence also showed that the tank had never been properly tested and that the approved plans had called for much thicker steel walls.  The trial was lengthy and included over 1,000 witnesses and 1,500 exhibits.  In the end one million dollars in damages was paid to the families of the deceased and the injured (approximately $100 million in today’s economy).

The Great Molasses Flood of 1919 is one of the most unusual disasters to ever strike the United States.  It is rumored that on warm summer evenings the smell of molasses still lingers in the air in Boston’s North End.

Sources for this article: